I had to visit Joe the Plumber’s website because despite the write ups in Raw Story, Huffington Post, Salon, and others, I still had trouble believing that he actually wrote, in an “open letter” to families of Elliot Rogers’s murder victims:

I’m sorry you lost your child. […] But: As harsh as this sounds – your dead kids don’t trump my constitutional rights. 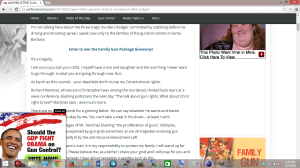 Joe’s words go nicely with these gems from Todd Kincannon:

No idea how my son will die, but I know it won’t be cowering like a bitch at UC Santa Barbara. Any son of mine would have been shooting back.

It’s too bad that the gun rights arguments are so dominated by chimp-brained Right Wing thugs like Joe Wurzelbacher and Todd Kincannon because not every argument for gun rights is wrong.

Technically, what Wurzelbacher wrote is true, but the fact that he doesn’t have enough normal brain cells in his head to realize how wrong it is to publicly berate a crying man less than a week after his son was murdered makes him and others like him an embarrassment to the people and the arguments he should be supporting. In fact, they’re an embarrassment to the nation.

I wouldn’t want the Left to win every gun control argument. Some of my fellow Liberals want to go a lot farther with gun control then I feel comfortable with. The Second Amendment must be interpreted by people who can read at an adult’s level of comprehension (who don’t think “shall not be infringed” means any weapon carried by any person in any location”) but it can’t be interpreted away as if it didn’t exist. If it were, we would effectively nullify the Bill of Rights and perhaps be in more danger than we are now with our heavily armed criminals.

We should have intelligent conversations about gun control, with Lefties admitting that the 2nd Amendment, like it or not, dictates that their will be more guns, more gun violence, and more gun accidents than they’ll comfortably accept and Righties accepting that even in the early days there were gun control laws so the 2nd Amendment doesn’t necessarily mean what they think it means.

To give credit where credit is due, Open Carry Texas asked it’s members and supporters to stop carrying long guns into business where they’re not invited to do so. We Liberals, justifiably, had a field day laughing at their failure, but we should acknowledge that at least somebody in the group had enough sense to eventually realize that acting like stupid, violent thugs isn’t the right way to win support.

I guess Todd and Joe didn’t get the memo.