When we (by ‘we’ I mean Sasha) decided to take the piglet in, we were afraid that he would have to be bottle fed, but fortunately he immediately took to slurping up formula from a bowl. The formula was a multi-animal milk replacer that we got from Farmer’s Feed and Seed.

The problem was, we couldn’t get him off the formula to start eating solid food, which would be a requirement for putting him back out with the other pigs. We figured it would only be a week or so before he started eating but with a bowl of pig food handy he’d scream for hours demanding milk.

So Sasha asked the world of Homestead Hogs what to do, and got this reply from Jerry:

Oh… another piglet with a well trained “Mom”.

I flat out guarantee, he will NOT starve to death with that bowl of food in there … He may (WILL) bitch loudly about mom changing his feed program, but he will figure it out as soon as he gets hungry enough.

Question is can you handle it? He will be screaming bloody murder….

The person who first said “Squealing like a stuck pig” didn’t just pick an animal at random. Lots of animals scream when they’re upset but I don’t think any other animal in the world screams like pig. The piglet (who we named “Kauai” at the request of Sasha’s sister) makes horrific blood curdling squeals and can keep it up until he’s satisfied. 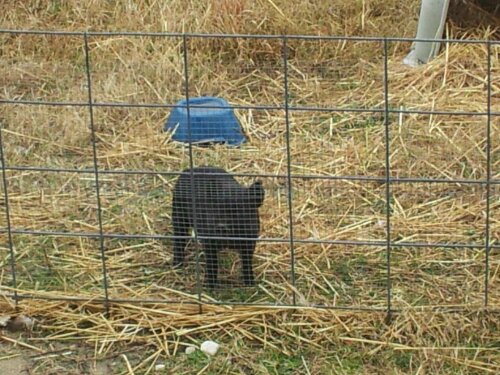 On another note, cleaning up after a piglet is a whole lot of work. I heard that you can train a pig to a litter box but we quickly decided that he had to go out. Good thing it’s been so warm lately. 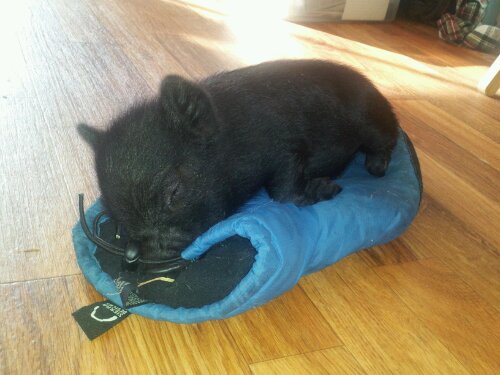 Actually it’s a little piglet.  It’s one of our American Guinea Hogs. None of its siblings made it and the mother wasn’t likely to be able to care for this one so Sasha took him in.  We don’t know how long he’s staying.  We have another mother with piglets that we might try to give him to but if that doesn’t work out he’ll stay with us until he can eat regular feed.

We’ve been very lax about the fact that our three little pigs can get out of the pen by squeezing under the fence. They’ve been harmless until today when they tore up the front lawn. Luckily, we don’t really have a front lawn because we haven’t finished the house, but the mess they made will make one hell of a sloppy mud puddle the next time it rains. One of the reasons we’ve been so lax is Sasha loves them. They really are cute. But it’s time to take care of that fence.