Thanks to Bill O’Reilly’s endorsement, I subscribed to Mother Jones.

O’Reilly helped my decision by calling Mother Jones a far left magazine with low circulation, and by saying the magazine is considered by many to be the bottom rung of journalism in America. It was also helpful to me to see so many conservatives circling the wagons around O’Reilly after MoJo presented incontrovertible proof that O’Reilly lied about being in the Falklands, and by O’Reilly’s reference to MoJo’s reporter David Corn as a liar and a “guttersnipe”. Joe Concha of Mediaite, while defending O’Reilly, called Mother Jones a niche magazine for Liberal Democrats. 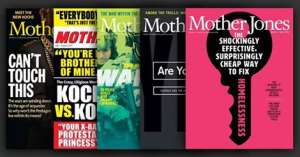 A subscription to Mother Jones is pretty cheap. I signed up through Amazon and got the Kindle subscription for $1 a month (It will go to $3 a month after the introductory price expires). It’s the same price for paper. I also found an offer on Facebook for a year of MoJo for $10.

After Mother Jones posted a story by David Corn accusing Bill O’Reilly of lying about being in the Falklands during the war that took place there and exaggerating his experiences in Buenos Aires, O’Reilly has been defending himself by denying ever having said he was in the Falklands, and by saying that his coverage in Buenos Aires counts as being in a combat zone.

I think that if O’Reilly had admitted that he misspoke about being on the Falklands but emphasized that he did cover the violent protests in Argentina and had been in dangerous situations elsewhere, this all would have washed over. But what O’Reilly did instead was cover his lies with more lies and with straw man arguments, pretending that the Mother Jones story denied his ever seeing violence in Buenos Aires and touting video clips showing the protests.

But Mother Jones never denied the violence. In fact, the original article noted,

Dispatches on the protest filed by reporters from the New York Times, the Miami Herald, and UPI note that thousands did take to the street, setting fires, breaking store windows, and that riot police did battle with protesters who threw rocks and sticks. They say tear gas was deployed; police clubbed people with nightsticks and fired rubber bullets; reporters were assaulted by demonstrators and by police; and a photojournalist was wounded in the legs by gunfire.

But O’Reilly exaggerated the violent reaction of the government against the protesters. According to the original article

O’Reilly noted that soldiers “were just gunning these people down, shooting them down in the streets” with “real bullets.”

Mother Jones called O’Reilly on his placement in the Falklands and on his exaggerations about the Buenos Aires protests, not on the fact of O’Reilly covering violent protests at all.

Bill O’Reilly is defending himself against accusations that were not made, because he cannot defend against what Mother Jones actually reported.

Unfortunately, after the article and O’Reilly’s initial defense, some reporters made questionable comments in their efforts to discredit O’Reilly. Eric Enberg put up a long post on Facebook in which he called the riots “relatively tame”. But when CBS released the old clips, Enberg’s comments became easy fodder for O’Reilly and his supporters, such as Mediaite’s Joe Concha who suggested Engberg must have been sleeping very soundly to have missed the sirens and gunfire.

O’Reilly lied by embellishing his experiences, then told more lies as he defended himself when his earlier lies were exposed. But the only thing Right Wing audiences will hear is how there really were gunshots in Buenos Aires, as if MoJo ever denied that there were.